Augusta von Preussen takes a journey across Namibia’s dramatic landscape – visiting desert eco-lodges, climbing the infamous Sossusvlei sand dunes and encountering some of Namibia’s rare desert-adapted wildlife, as well as having a very near miss with a unexpected river flash flood!

Namibia is a country of extremes. From over 40C degree midday heat in Damaraland, whilst viewing the ancient bushman rock engravings near Twyfelfontein, to a bone freezing 5C degree dip in the whale-filled Atlantic (followed by a lunch of locally grown oysters!), no day is ever the same.

Flying from one camp to another also illustrates the geographic extremes. As a country where 60% of the population lives in one small area of the north-east, the land has been left as it has been for millions of years - flat, parched terrain that rises to a thick band of red undulating dunes before meeting the ocean’s rocky beaches, home to seals and the skeletons of whales and wrecked ships. It may not have the deltas of Botswana, the great animal herds of East Africa or the 5-star hotels and restaurants of South Africa, but Namibia is unique in its rugged simplicity…and full of surprise and adventure along the way.

After a night in one of Windhoek’s charming little B&B’s, my two-week safari through this wild and desolate land began with a 6-hour drive south-west to the world-famous sand dunes of Sossusvlei in the Namib Naukluft National Park. Our base here was Little Kulala, designed to blend with the arid landscapes and created from a combination of bleached wood, glass and natural fabrics. Each little cottage has its own plunge pool and rooftop ‘star bed’, where I spent a blissful night beneath the constellations listening to the sound of jackals hunting in the distance.

An early morning trip to the dunes became an unexpected challenge when Jeremia, my wonderfully informative and patient Wilderness Safari guide for the two weeks, persuaded me to tackle Sossusvlei’s largest sand mountain. It was well worth the 1,000 vertical feet of climbing in the bright sun though, with an awesome view from the top, and running down to the infamous Dead Vlei with the sand humming beneath my feet just added to the surreal exhilaration of it all. 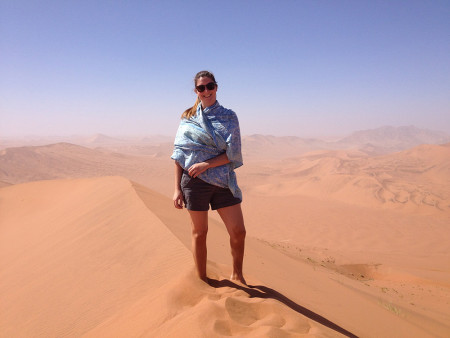 Augusta on top of the sand dunes in Sossusvlei

A safari usually conjures up images of elephants playing in a river and lions resting in the shade of an acacia tree, but Namibia is the driest country in Sub-Saharan Africa and so its animals have had to evolve into desert-adapted versions of their familiar selves in order to survive. Elephants can go three days without water, with larger than average feet to help them negotiate the steep-sided loose granite hills, while lions live high up on rocky escarpments and will roam hundreds of kilometres in search of a suitable mate. 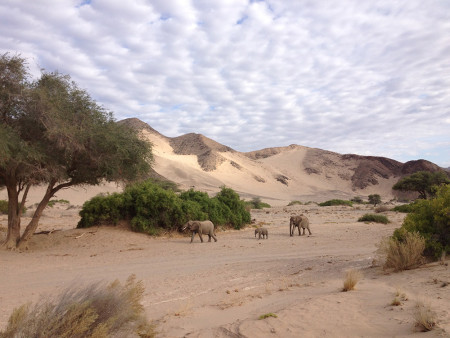 Family of elephants on the Hoanib Riverbed

Nowhere was this evolution more evident than in the Hoanib region. Here, in the far north of the country, giraffe huddle in large skittish herds around clusters of coarse shrubs, and will gallop off at breakneck speed at the slightest alarm, the smooth gravel plains no obstacle to their flight. The desert-adapted lion can also be found in the Hoanib, but I was still beyond lucky to see the local pride as they are among the world’s rarest creatures.

I stayed at the brand new Hoanib Skeleton Coast Camp, very luxurious but sympathetically designed with a strong focus on eco-friendly solutions to the numerous challenges of inhabiting this land. The camp has a beautifully decorated main area full of squishy sofas, a smart lap pool and stretched canvas ‘tents’ which are larger than the average London flat - the sort of place that can quickly become too much like home, but if I hadn’t had to drag myself away I would have missed out on one of Namibia’s more extraordinary phenomena. 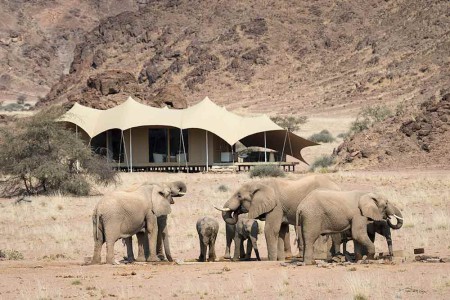 Roads in northern Namibia are few and far between, and so our 4x4 trundled away from camp along the dry Hoanib River bed. We all assumed that the small trickle of water (another rarity in these parts) was from a bore hole that must have been broken by elephants. We assumed wrong! Rounding a small bend and heading towards a narrow canyon, the sudden sound of rushing water was far too loud to be from a bore hole. The river was flash flooding, but our quick thinking guide accelerated our vehicle to higher ground just as a wall of water exploded from the canyon taking everything that lay in its path with it.

Flash floods in Namibia are seen by very few except passing oryx, such are their unpredictability, and so our tale was met with wide-eyed disbelief by locals we met along the rest of our jouney. And had it not been for a photogenic breeding herd of elephant that we had stopped for minutes earlier, the day may have ended abruptly with an emergency evacuation for the poor Land Cruiser and all of our belongings!