Tucked up at the end of an inlet called Smith, a deep wild fjord off the coast of western Canada, is a five room floating lodge called Great Bear.

You can't drive there as there's no road. Nor can you catch a ferry. The only approach is by float plane, one barely bigger than a dragonfly. You take off from Port Hardy and head due east over the mountains, still patch-worked by blankets of snow even in August, and drop down into the heart of absolutely nowhere.

The Lodge is run by Marg and Tom who towed their Lodge to its present location by barge, an eighteen hour ride across Queen Charlotte Sound. There’s a pair of highly qualified guides, a cook and a two housekeepers. Their nearest neighbours, Henry and Glenda, live 25 miles away and were last seen over a year ago. The nearest shop is 75 miles away. 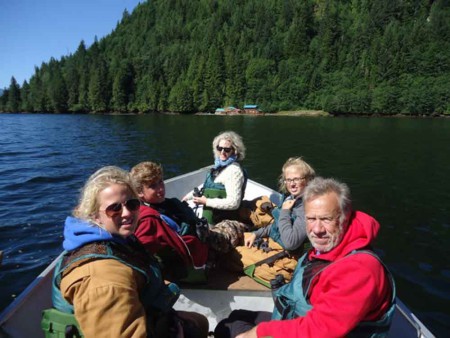 Great Bear's stock in trade are safaris. Each day there are guided activities, mostly by boat and mostly geared to looking for bears, both grizzlies and brown bear. The A-listers include Bo whose photo in the Lodge shows him standing on his hind legs like a comic bad giant, his back against a tree, scratching his back on its bark. Then there’s Lefty, Mad Max, Freebie and the monster grizzly Pacino, big enough to block out the sun according to our guide John. In the course of our outings he also shattered a few of the common bear myths such as how they like honey ('it's the bees they are after in the hives') and never to play possum if challenged. Nor run, as the slowest, most lumbering of bears could still outrun Usain Bolt.

But our boat trips and gentle hikes are also all about taking in nature's other offerings, the fantastic scenery, the other animals (seals, bald eagles, ducks, mink and otters) and a landscape of a zillion Christmas trees, fifty shades of green including cedars, sitka, hemlock, alder... many a thousand years old and as high as a twenty story block of flats. 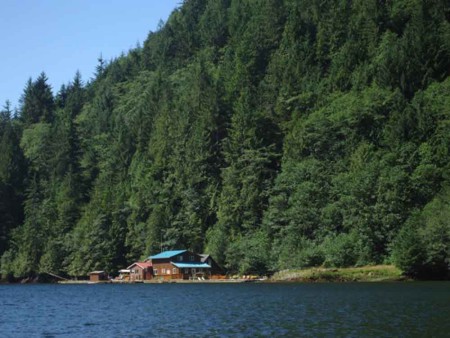 Despite the wilderness setting, there are no compromises on guest comfort although accommodation is simple: small rooms, own toilet and washbasin but shared showers. The cooking, however, is excellent and, in between meals, you are welcome to wander in to the kitchen, help yourself to tea, wine, beer and hard to resist home based cake and cookies. Great Bear Lodge is all about the sheer privilege of being somewhere so remote yet well fed, cosseted, guided and educated.

If anyone had told me I'd be spending most of three days in a dinghy, slowly and silently pottering up and down and around a labyrinth of islands, I'd have probably said no thanks. But the experience was amazing, the immersion in the natural rhythms of the wilderness, the changing light, the show of skies mystical clouds finger, the drifting, ethereal canopies of mist as well as the bonus or remarkable wildlife.

Read more about our holidays to Canada