Canada - Aboard the Rocky Mountaineer

David shares his experiences aboard the Rocky Mountaineer in Western Canada and what it was like having a front seat view to one of the world’s most spectacular landscapes.

To the shrill toot of the whistle, a couple of Scottish bagpipers and cries of 'All Aboard' we took our seats on what is undoubtedly one of the most scenic rail journeys on the planet.

The Rocky Mountaineer carried us in style from Vancouver to Jasper, a two day journey which first follows the Fraser River as it cuts with fearsome froth and fury through a series of granite gorges, including the aptly named  'Jaws of Death' and 'Hell's Gate,' and across the arid rain shadow landscapes that divide the Coastal Ranges from the Rockies proper. 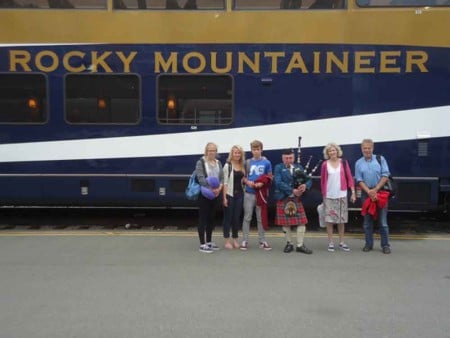 It then accompanies the Thomson River, gradually climbing up and over the Continental Divide, the place where a single raindrop can end up in either the Pacific or the North Atlantic depending on whether it falls a few inches either side of the line. But the Rocky Mountaineer is more than a train ride. The on board crew turn the super-scenic journey into an incredible experience. If you can afford Gold Leaf class, you won’t regret it. The food, with proper menus for breakfast and lunch, drinks included, is superb, served in the restaurant on the lower deck of your carriage.

Between meals the Gold Leafers adjourn to their upper observation lounge for awesome views through the glass domed ceiling. It’s like being a spectator in an endless pageant of ‘Come to Canada’ promo posters (such is the scale of the mountains that you definitely need to look up as well as across to appreciate them). We also spent lots of time on the open air observation platform between the carriages where memorable sights - other than the awesome topography - included freight trains with 100 or more carriages snaking along the contours, massive osprey nests precariously balanced  on top of the telegraph poles, wild Big Horn sheep grazing on impossible slopes and the occasional logging community, their outer limits marked by saw mills surrounded by giant piles of logs. 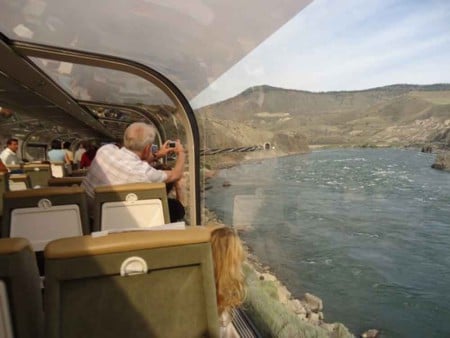 The RM service is seamless, enhanced by interesting commentary on the route laced with tales of gold prospectors, Hudson Bay fur traders, First Nations’ settlements and historic like. Everything is thought through, from your luggage that manages to arrive in your hotel room before the bus from the stations drops you off (all passengers spend one night in hotels in Kamloops so as not to miss any of the scenery), to the driver who slows  the train for the so called 'Kodak Moments' (how long before that gets changed to 'iPad Images'?).

They even offer free Nicorette patches for the smokers struggling with a full day on the tracks without a puff. There’s a choice of routes. From Vancouver you can also travel to Banff, the main resort in the Rockies, although whichever approach you choose you should also rent a car and drive between the two towns along the Icefields Parkway which parallels the highest, most rugged, peaky chain of mountains following a valley studded with lakes that look like spillages of brilliant paint. 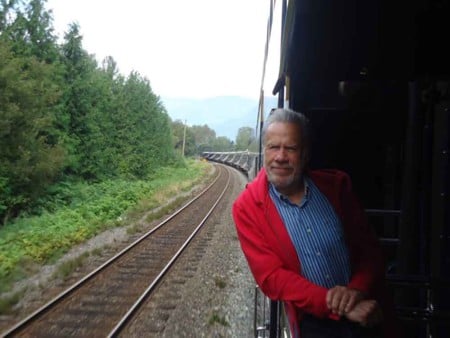 An alternative route will take you to the Rockies via Whistler. Host of the 2010 Winter Olympics.

Read more about our holidays to Canada