Highlights of Ecuador and the Galapagos

Laura journeys through Ecuador experiencing its wildlife and culture, before setting sail aboard the Cormorant to explore the wonders of the Galapagos Islands.

“On my last visit to Ecuador, some seven years ago now, I only had time for a whistle-stop tour of Quito, so I was keen to explore beyond the capital and see as much as I could of the country in the two weeks at my disposal.

I began in the historic centre of Quito, much as I had remembered it on my first visit but now with a new and wonderful hotel, Casa Gangotena. This beautifully restored mansion overlooks the San Francisco church and is everything you’d expect from a prestigious 5-star hotel - warm greetings from attentive staff, creatively-inspired afternoon tea (complimentary for all guests), elegant rooms with amazing raindrop showers and incredible cuisine prepared by a very young but hugely talented Ecuadorian chef.

My lunchtime visit to Chilcabamba (a beautiful secluded lodge to the south of Quito) was fleeting but afforded me amazing views of what is the trending topic of conversation amongst locals and tourists alike: Cotopaxi, steaming and smoking away in all its magnificent volcanic glory. The volcano is currently on yellow alert and therefore perfectly safe, although you are not allowed to enter the actual National Park. 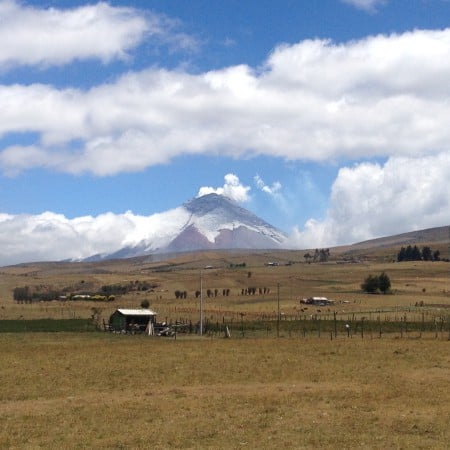 From Quito, I moved on to Mashpi Lodge, set on 3,200-acre private reserve of rain and hillside cloud forest in the Choco region and with the same owners as Casa Gangotena…so more warm welcomes and attentive service. Mashpi boasts some highly knowledgeable and enthusiastic naturalist guides, so I made the most of this and crammed in as much as I could with a visit to the colourful butterfly farm, a rather hair-raising cycle ride at canopy level 60 metres above the forest floor on Mashpi’s sky-bike, a night-time hike with tarantulas, army ants, green tree frogs as my companions, and an early morning climb up the observation tower for a spot of bird-watching. Plus a cooling and refreshing dip under a natural waterfall, followed by one of the very best massages I have ever experienced and a fitting finale to my jungle adventure.

Next up the Galapagos Islands for a 3-night cruise on the Cormorant, a deluxe 16-passenger catamaran with incredibly spacious and well thought out cabins, each with its own private balcony. Given I only had two full days in the islands, I still saw an amazing amount - sea lions and their pups sprawled across pristine white-sandy beaches, blue footed and Nazca boobies feeding their adorably fluffy chicks, pink flamingos, land iguanas and albatrosses practising their courtship rituals.  Underwater wildlife was equally amazing, and I loved my snorkelling with reef sharks, giant turtles, sea lions and even penguins! 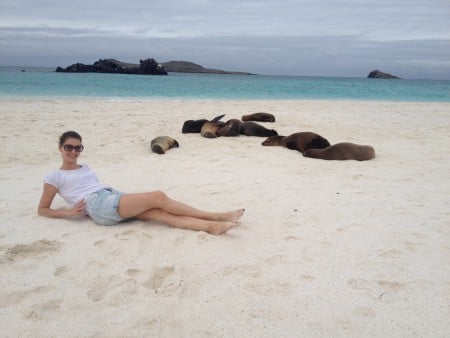 Returning to Quito for the night, I flew on to Coca and the gateway to the Ecuadorian Amazon. I divided my time here between Napo Wildlife Centre and La Selva, two lodges which I felt complemented one another perfectly. Napo is owned by the local community and is the only lodge located within the Yasuni National Park, so wildlife sightings here are as good as you are likely to get in the Amazon. Three-types of monkey, two-toed sloth, black caiman, the very rare grey dolphin, and a family of giant river otters were my own particular highlights. La Selva is just a short boat ride away from the main Napo River and offers a little more in the way of comfort and style, but I still got to see three-toed (not to be confused with two-toed) sloth, three-metre long Paiche fish, squirrel monkeys up close and some turtles. It is though all about the birds in the Amazon, and you are really are spoilt with more than 500 species and some of our planet’s rarest and most exotic species.  Both lodges had observation towers, which are the place to be first thing in the morning when the birds are most active.

The final leg of my journey took me north of Quito to Imbabura Province for some outdoor adventure at Hacienda Zuleta. This charming working farm, run by descendants of former President Galo Plaza and close to the famous Indian market town of Otavalo, has walls adorned with old photographs of the family and offers a fascinating insight into the estate’s history. Walking and riding are the core activities here, with a number of established trails including one to their Condor Project, where nine captive condors are the focus of a rehabilitation programme which will eventually release their offspring into the wild - a painstakingly slow process, but one that has received widespread support. With the number of wild condors in Ecuador now below fity, extinction is a very real threat, and so the hatching of any new chick and its care during the first few critical weeks is a cause for excitement and anxiety in equal measure at the Project."