Argentina – from Salta to Puerto Valdes

Sara Willis unearths new gems on her fourth visit to the Argentine.

It was such a treat to visit Argentina for a fourth time and discover not just one but two amazing gems that I hadn’t even been within driving distance of before – Salta, on the Bolivian/Chilean borders in the north-west of the country, and Peninsula Valdes on the Atlantic Coast in mid-Patagonia.

Sara has a wide knowledge of the Arctic and Antarctica as well as South and Central America.

Completely contrasting areas of outstanding beauty and both good when much of the Argentine remains ‘off season’. Most trips to Faena Hotel for Tango Rojo, a spectacular show, and definitely the best in town, that kept me fully absorbed despite jet lag and the previous night spent upright in an airline seat.

From Buenos Aires I flew north to Tucuman, the city where Argentine independence was declared in 1816 and the starting point for my exploration of the North-West. This was an area that was heavily disputed in the 15th and 16th centuries - in those days it was largely to do with mineral ownership, but if there was ever a dispute over breath-taking scenery, you could understand why Salta might be at the centre of it.

For the next six days I feasted on dramatic mountains, artistically carved and beautifully painted in reds, greens and splashes of purple; on lush valleys nurturing some of Argentina’s finest wines; on shimmering plains of crystalized salts; on crisp blue skies; and last, but by no means least, on an all encompassing silence that was simply mesmerising. I hadn’t realised how similar to Bolivia Salta would feel culturally. Being so close, the indomitable Incas made many a foray across the Bolivian border and played a major role in its history. I had to remind myself from time to time that I was actually in Argentina.

Although Salta is relatively new to significant international tourism, there are already a number of good hotels. The best properties are seeped in colonial history, with dollops of character and cellars overflowing with delicious local wine, but for real immersion into the local culture and a modern-day gaucho experience, you should look no further than El Bordo de las Lanzas. Two hundred years ago, this wonderful estancia was home to the mother of General Guemes, the legendary gaucho and key leader in the early 19th century battles for independence. Expect to encounter traditional Argentine hospitality at its finest here but no mod-cons - televisions and fizzy drinks, for example, are only noticeable by their absence, although a concession has been made for wifi!

It wasn’t easy saying goodbye to such scenic splendour and warmth (did I mention the North-West’s idyllic climate?), but some three hours of flying and a 25c drop in temperature later, I was in Patagonia and eager to begin the second half of my adventure. For the wildlife enthusiast and lover of wide open spaces and huge skies, I was about to discover that Bahia Bustamante and Peninsula Valdes were the real deal. I was duly impressed by southern right whales off the peninsula on my first morning, but had all but forgotten them later that afternoon as I sat utterly transfixed by grunting elephant seals nursing and reprimanding their young. By the time one of the seals gave birth immediately in front of me, the southern right whale had ceased to exist. Several weeks have since passed, but I am still talking about it! 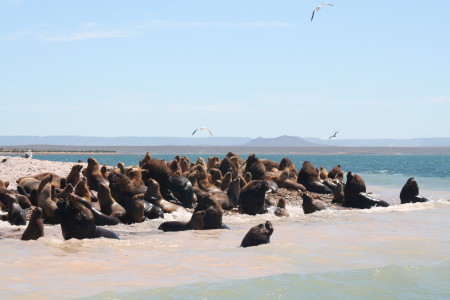 Back on land, I was also quite taken by a couple of hairy armadillos ambling clumsily across the road in front of us and a burrowing owl relaxing on it’s doorstep in the evening sun. I headed south the following morning for Bahia Bustamante via the Magellanic penguin colony at Cabo dos Bahias. The colony had only just opened for business by mid-September, but it was still fun to watch some of the males arrive after months at sea and seek out their nests from previous years. A few even decided to upgrade to beach-front sites. I am not ashamed to admit that I come over all emotional when I think back about Bahia Bustamante. Over an hour from the nearest petrol station and pint of milk, it is as wild as a place as you can ever hope to find and I have never been remotely close to anywhere that quite compares. With its craggy coastline interspersed with white sand beaches and crystal blue waters, Bustamante unequivocally belongs to the wildlife, and days (even weeks) can be spent riding, cycling, hiking and boating…or simply relaxing on one’s veranda and revelling in a true feeling of escapism.

I loved my time in Buenos Aires and Salta, but the best had most definitely been left till last!