It would be naïve to ignore Kenya’s recent and well-documented travails. However, I have recently and safely returned from an exhaustive 3-week reconnaissance and would urge you not to pass up the opportunity to visit this truly captivating country.

It really does have something to offer everybody - adventurers, anthropologists, artists, families, photographers, romantics, single travellers, those looking simply for relaxation…and animal lovers of course! My first week was spent within the smaller, often privately-owned reserves that are dotted around the country. I first flew south to Amboseli National Park, on the Tanzanian border and in the shadow of Kilimanjaro (an incredible backdrop to the daily sundowner), where elephants gather in huge numbers and game grazes happily on the endless plains, albeit with one eye on the hungry hyenas that lurk on the sidelines.

Next stop was Northern Kenya, slap bang in the middle of the country as it happens and the rocky massif of Mt Kenya its principal physical feature. The focus here is on the incredible, far-reaching panoramic views and on the ‘Northern Five’ of the game-viewing world - the extremely rare Grevy zebra, reticulated giraffe, gerenuk, Somali ostrich and Beisa oryx, all of which I was lucky enough to see in just a few days. There is also an emphasis on the rhino, with many reserves actively involved in breeding and protection programmes, the aim being to re-introduce this endangered species into its natural habitat as well as educate local communities in the importance of wildlife conservation. I stayed, variously, at Joy’s Camp, an isolated but luxurious oasis in the Shaba National Reserve where Joy Adamson famously lived out her later years; at Elsa’s Kopje in the Meru National Park (Joy and her husband George brought up their favourite lioness here), where rooms have spectacular views and guests are encouraged to relax with a massage or a dip in the inviting infinity pool; and at Kitich Camp in the spectacular Mathews Mountains to the north of Samburu. Kitich is extremely remote, more than an hour’s drive on a forest track past Samburu herdsmen dressed in bright beads, camels with huge wooden bells and the occasional Manyatta. 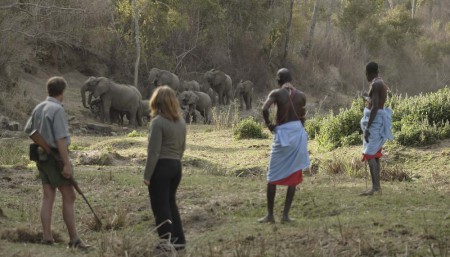 No tourist markets here, and no roads to speak of either, so safaris are done on foot and introduce you to a whole new world of smaller but equally exciting flora that are largely overlooked on a regular game drive. With mountain hikes through lush montane rainforest and river swimming also on the agenda here, Kitich offers a completely different side to Kenya. My time in the north also included a brief but delicious lunch at the Lewa Safari Camp in the Lewa Conservancy and a flying visit (literally!) to Loisaba on the Laikipia Plateau, where the views are stupendous and large herds of elephant gather at the watering holes immediately below the camp.

I then moved south-west across the Great Rift Valley to the Masai Mara. The Mara is of course Kenya’s flagship wildlife sanctuary, and rightly so, but there are a number of conservancies bordering the reserve that allow for a more private, exclusive safari without compromising the actual game viewing. Camps are few, bed numbers are limited and outside access is prohibited, so there are not nearly so many vehicles, the mood is more relaxed and natural habitats are allowed to thrive away from the hustle and bustle of the main reserve. You would have to be very unlucky not to see four of the ‘Big Five’ here, although leopard always takes a degree of patience. Rhino numbers, sadly, have decreased dramatically in and around the Mara, so you are likely to have more joy in northern Kenya. Accommodation ranges from simple, close-to-nature, traditional bush camps to uber-chic, deluxe tented lodges with all mod cons and such ‘extras’ as high-tech binoculars and cameras for every guest! 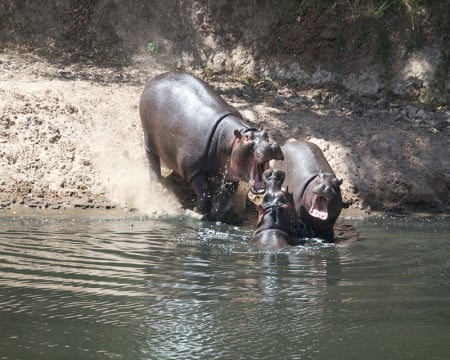 However, what they all have in common is a genuine and caring focus on the wildlife, the local community and the environment. Most are also eco-rated, grow their own vegetables, use bucket showers, recycle water, and run on solar powered energy rather than generators. But perhaps most important of all, managers and staff are, without exception, wonderfully hospitable and guides medal-rated, knowledgeable, informative and enthusiastic.

After the rigours of two weeks on safari I was due some down time, so I headed via Nairobi to Lake Naivasha. This was the original ‘Happy Valley’ and properties remain true to their colonial roots, with pre-dinner drinks in the drawing rooms, open log fires and pets galore. And of course there’s the lake itself, vast and spectacular. There are also smaller lakes in the vicinity - Lake Olodien, for example, where you can watch hippo pods floating past flocks of spindly-legged flamingo. The Nakuru National Park is a two hour drive away (good sightings here of that elusive rhino) and Hell’s Gate is a great place to spend the day hiking, mountain biking and picnicking. And if you have the time, spend a night in the tower at Hippo Point. It’s an unforgettable experience!

My last port of call was Kenya’s Indian Ocean coastline. Just a 90-minute flight from Nairobi and I was sipping a delicious cocktail on the sands of Diani Beach and enjoying the indulgent comforts of fabulous Kinondo Kwetu. I have to admit that it was absolute heaven on earth, and the perfect way to end a truly inspiring journey through this diverse, naturally rich and welcoming country. All in the name of research of course!