Augusta’s three week trip to South Africa, travelling from one end of the country to the other, and beyond, has taught her that the Rainbow Nation has so much to offer its visitors.

My trip began in the cosmopolitan city of Cape Town. Separated into different areas, such as the Victoria and Alfred waterfront, the winelands and Camps Bay, there is somewhere to please everybody here. Hotels vary from chic boutique guest houses set in the cliffs above the beach (The Clarendon Bantry Bay) to grand 200-bedroom historical buildings with dining options galore, a choice of swimming pools and acres of manicured gardens (The Mount Nelson).

I stayed in Constantia, Bantry Bay and the City Bowl respectively, and it honestly felt like three different cities. Constantia offers beautiful countryside and wine, Bantry Bay the sound of waves crashing outside your window and relaxed seaside restaurants down the road, and City Bowl safe streets of elegant and traditional cape houses within walking distance of Kloof Street with it’s great selection of antique shops and quirky cafes. Two of our favourite properties here are Kensington Place and Cape Cadogan.

I then moved inland to Franschhoek, in the Cape winelands. A charming, little town with a very French feel where, again, I was struck by the variety of accommodation on offer. Mega luxury at La Residence, laid-back Provencal style at both Auberge Clermont and Le Petite Ferme, and clean white cottages set in extensive fruit and vegetable gardens at the Babylonstoren wine estate, to name but a few. Obviously the main focus in this area is the wine, but food by no means takes a back seat. Many of the vineyard restaurants are booked up to three months in advance, with people travelling the 90 minutes from Cape Town for dinner alone, and the rolling vineyards and mountains act as the perfect backdrop for long lunches.

For those who’d rather not drive between vineyards, the new hop-on hop-off Franschhoek Wine Tram offers the perfect solution. With the use of both an old-fashioned open-sided wooden tram and its sister bus, you are taken on a selection of two different routes through the valley, with tasting and dining options along the way.

My next task was to explore the Garden Route, famed for its coastal beauty and somewhere that I have always wanted to visit. It didn’t disappoint. Craggy slopes plunge sharply down to the wild sea below, which teems with whales during the spring months. First stop was Hermanus, whale-watching capital of South Africa, and Birkenhead House, which is arguably one of the best spots from which to watch them. Coastal walks are another main draw here, but if you arrive in the midst of a dramatic storm as I did, you can always relax by the open fire in the peaceful sitting room or indulge in one of the exceptional spa treatments on offer. Dinner too was a three course masterpiece, accompanied by delicious local wine. 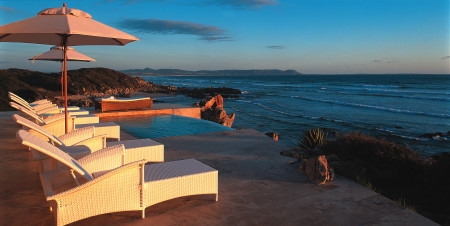 Further along the coast, past hills blooming with aromatic Fynbos, is Plettenburg Bay, another family-friendly seaside town with pristine beaches. I stayed here at the wonderfully eclectic Emily Moon - more log fires, more amazing views (this time of the meandering river and wetlands leading to the nearby sea), and more incredible gastronomy. There are also golf courses, nature trails through The Crags, animal sanctuaries, shark diving, horse riding and wine estates to keep even the most energetic of travellers entertained.

I continued east to Port Elizabeth and the non-malarial safari reserves of Addo, Amakhala and Shamwari in the Eastern Cape that all offer the chance of seeing the ‘big five’ and impressive levels of four and five star luxury. There are camps for honeymooners, lodges for families and contemporary exclusive-use houses that come with their own butler, cook and safari vehicles, underpinned by a strong focus on conservation.

I then flew to Durban and drove for six hours up the coast to Thonga Beach Lodge, a stunning spot not far from the Mozambique border where you can relax and enjoy a wide variety of activities in equal measure. There is no phone signal here, wi-fi is limited and the lodge is an hour’s drive in a 4x4 from the main road, so you really are in the middle of nowhere. Snorkelling was a particular highlight, as were the dinners of local seafood.

History was next on my menu in the shape of the Ango-Zulu and Anglo-Boer wars. First stop was Fugitive’s Drift, owned by the Rattray family who are dedicated to preserving the iconic legacy of this humble region. They organise highly charged tours to the infamous battlefields of Islandwana and Rorke’s Drift, from where my emotions were roused by a combination of Zulu warrior chants and British military brass music played at full blast by the driver of our ancient land rover whilst dodging cows and sheep on the dusty road back to the lodge. Dinner at Fugitive’s is a colonial affair, everybody sitting together in the incredible dining room which is bursting at the seams with war paraphernalia. 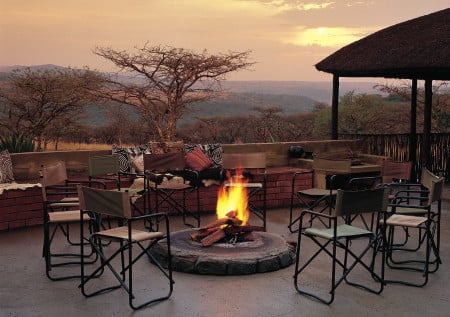 Three Tree Hill lies nearby and is a similar set up, but focuses instead on the battle of Spioenkop which took part on and around a dramatic hill top that can be seen from the lodge. The battlefield tour was fascinating, but I also found the time for a three hour walk in the neighbouring Spioenkop Nature Reserve, where the views were stunning and close up encounters with giraffe, zebra and warthog memorable, and a thrilling early morning ride out on one of the lodge’s free range horses. All of this exercise was not just for fun, though. I was due to spend a couple of nights at Cleopatra’s Mountain Farmhouse, a beautiful lakeside property in the shadow of the Drakensburg, and had been warned about its extremely impressive chefs! To be on the safe side, I decided to burn yet more calories by heading straight up the nearest hill - the climb combined with the insane views from the top left me breathless – followed by a swim in the river. It set me up perfectly for the seven course extravaganza of a dinner that followed. 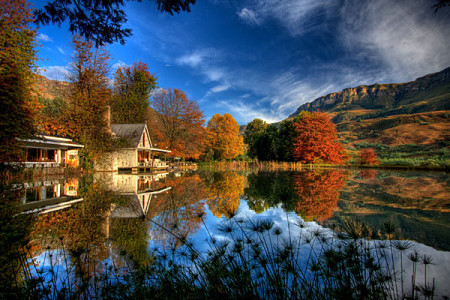 My trip ended in Sabi Sand, a ‘big five’ game reserve bordering the world-famous Kruger National Park that offers a more exclusive, up-market approach to safari than its neighbours. Indeed, the quality of the camps is second to none. Savanna were my particular favourites, but wherever you choose to stay, you will be treated to inspirational guides, wonderfully caring camp staff, elegant interiors, fantastic food and wine served in a variety of different settings, and of course spectacular game viewing. Be it to learn more about the local wine, to explore the country’s awe-inspiring landscapes in greater depth, or to spend longer with the wildlife, I am already looking forward to my next South African adventure!

View our South Africa hotels and holidays for more information.