Best places to dive in Asia

Neil, one of our Asia experts, is a keen diver and has enjoyed diving in many of the most stunning underwater worlds.

I learnt to dive in Krabi on the west coast of southern Thailand back in 2001, I loved every minute of it and have taken every opportunity since to explore the underwater riches of Asia. If you are thinking of doing the same, the following thoughts may be of help…

Off the north-western tip of Indonesia's West Papua Province, the Raja Ampat Islands have the highest recorded diversity of fish and coral on earth. A staggering 537 coral and 1,074 fish species can be found here. I spent my honeymoon on the islands, at the wonderful Misool Eco Resort, and I have yet to experience such spectacular diving and snorkelling since.

Highlights included a rare sighting of a pygmy seahorse - so small I could only see it when I looked at my pictures afterwards on a big screen! - and diving with manta rays at Magic Mountain, an underwater peak a few minutes from the resort. Mandarin fish are considered to be the most beautiful fish in the sea and can be seen on the wonderful Misool’s house reef at sunset, but despite the best efforts of myself and my dive guide they eluded us. I will have to return!

Also in eastern Indonesia, the Komodo National Park offers superlative diving. The park consists of Komodo, Rinca and many other small islands where strong currents attract a rich diversity of marine life. I was very fortunate to do a few short dives from Tiger Blue, a traditional Indonesian schooner that offers exclusive group and family adventures in this beautiful archipelago of islands, but I still saw a huge amount including turtles, sharks, cuttlefish, lionfish and clownfish. Some of the best diving outside of Indonesia can be found in the Similan Islands, a chain of granite islands an hour from the coast at The Sarojin in southern Khao Lak and take the resort's speedboat, the Lady Sarojin, for some private diving. 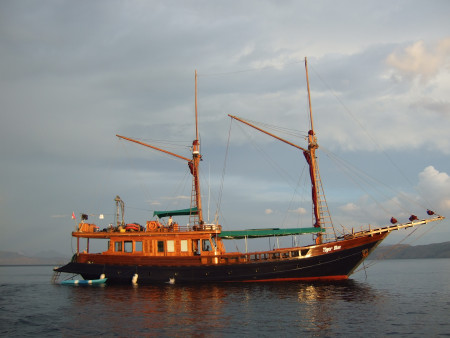 The Maldives was a very special experience as well. I stayed here at an enchanting little resort called Mirihi which has a fantastic house reef. Aside from the very friendly and inquisitive turtles that have become very used to snorkellers, I encountered lots of large parrotfish and a couple of even larger batfish that had taken shelter under the jetty on a stormy day. Night snorkelling was also quite an experience at Mirihi - the first thing I picked out with my flashlight was the glowing eyes of a shark, only two feet long admittedly, but perspective is no easy matter when you're in the dark and underwater!

There was time too for snorkelling safaris to other reefs and on one such excursion I swam alongside a whale shark for about ten minutes. The whale shark is the largest fish in the sea and so it was a rare privilege.